My first serious quest into business, leadership, and ethical issues was related to Leadership and Organizational Behavior classes in my student days. The professor was bringing up the points that our colleagues in class are our direct competition and thus any kind of sentimental help we give one another will only cause us trouble. From day one, he was insisting that we should see others as potential threats to achieving our career goals. According to him, for the ultimate success in one’s studies a student should exhibit self-interest. Our teacher was partially grounding his elaborations on Adam Smith’s policy of the invisible hand, which is said to assure that the pursuance of one’s own interests in the free and open market will further the benefits of all. In The Wealth of Nations, in 1776, a ground-breaking text that laid the cornerstone of modern economics, Smith says:

It is not from the benevolence of the butcher, the brewer or the baker, that we expect our dinner, but from their regard to their own interest. We address ourselves, not to their humanity but to their self-love, and never talk to them of our own necessities but of their advantages. (2005, 18)

The invisible hand is the natural mechanism that channels “the private interests and passions of men” in the direction most agreeable to the interest of the whole society. A fundamental issue in Smith’s theory is his definition of self-interest: “bettering our condition, a desire which . . . comes with us from the womb, and never leaves us till we go into the grave” (2005, 279). 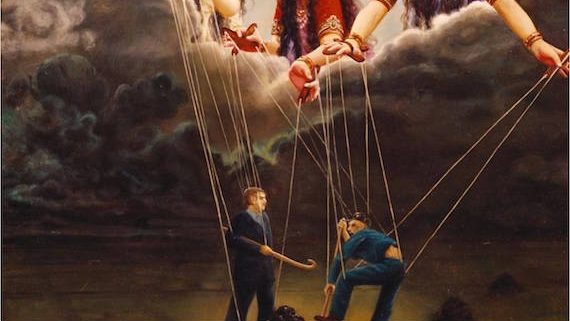 “The invisible hand”. The exact phrase is used just three times in Smith’s writings, but has come to capture his notion that individuals’ efforts to pursue their own interest may frequently benefit society more than if their actions were directly intending to benefit society.

The definition of self-interest in the eighteenth century is far different from what it was in 1994, when I was listening to my Leadership and Organisational Behaviour classes. In 1776, the topic of economics was seen as something like a branch of ethics. Pierre Force (2003, 185) points out that Smith’s assumption was that in seeking their self-interest, business leaders would behave ethically and with a conscience. It is important to note that Smith never endorsed the idea that self-interest is the main cause of all human action, but self-interest does have a relevant place in individual reasoning. Being a professor of Moral Philosophy at the University of Glasgow, Smith never supposed that human beings are driven solely by self-interest in a materialistic sense. Rather, he presumed that for most people self-interest would include their spiritual interest. Smith asserted that business must be conducted only in a society that is balanced by justice and morality:

No society can surely be flourishing and happy, of which the far greater part of the members are poor and miserable. It is but equity, besides, that they who feed, clothe and lodge the whole body of the people, should have such a share of the produce as to be themselves tolerably well fed, clothed and lodged. (Smith, 2005, 70)

Smith assumed that parties involved in the economy would align with a natural law: “Whatsoever a man sows that shall he reap.” In other words, his Wealth of Nation takes it for granted that people would exhibit the values and virtues of Christianity, the predominant religion and cultural influence of his time and place.

Developing Smith’s ideas, Milton Friedman, “the most influential economist of the second half of the 20th century,” writes in Capitalism and Freedom (2012):

There is one and only one social responsibility of business – to use its resources and engage in activities designed to increase its profits so long as it stays within the rules of the game, which is to say, engages in open and free competition without deception or fraud.

The modern economy accepts Smith’s self-interest and Friedman’s open and free market hypothesis as things we all know, based on which the market smoothly functions. Still, we should be aware that the free market is shaped by individuals, who are constructive social beings – ethical beings. The foundation of success lies in adherence to a global social ethics, some economists say  (Evensky, 1993, 197).

What if Smith’s and Freidman’s theories start to be applied much differently than initially envisioned? Gordon Gekko (Wall Street, 1987) echoes the reality of the USA’s free market in the late eighties:

“We make the rules, pal. The news, war, peace, famine, upheaval, the price per paper clip. We pick that rabbit out of the hat while everybody sits out there wondering how the hell we did it. Now you’re not naive enough to think we’re living in a democracy, are you, buddy? It’s the free market. And you’re a part of it. You’ve got that killer instinct. Stick around, pal. I’ve still got a lot to teach you.”

Of course we are referring to a movie, but what if the financiers’ ideas were stretched to the point of making business decisions based solely on the principle of greed for profit? Analysing the consequences of such motivations, Arrow and Hahn (1971, 16), joint winners of the Nobel Memorial Prize in Economics, conclude that the result of such unethical leadership will be irreparable chaos coming from such unethical leadership.

Smith, A. (2005). An Inquiry into the Nature and Causes of the Wealth of Nations. A Penn State Electronic Classics Series Publications. Pennsylvania State University.

VIDEO: Learning with Cases is Exciting, Inspiring and Entertaining