You are here: Home1 / Accreditations

Degrees delivered at Alfred Ford School of Management are accredited and awarded by Paris Pole Alternance (PPA) and its international school IPE Management School – Paris which are well established and internationally acknowledged Higher Education Institution – a Grande Ecole within the Réseau des Grandes Ecoles Specialisées (GES). PPA with IPE together delivers Undergraduate and Postgraduate level degrees whose key objective is to educate managers with superior skills and capabilities to make ongoing and lasting contributions to the global economy and society as a whole.

Pôle Paris Alternance (PPA) is an Institution of Higher Education of Réseau Grandes Écoles Spécialisées (Réseau GES) and is fully approved and authorised by the French State to award qualifications at Level 1 Masters) and Level 2 (Undergraduate).
IPE Management School Paris (IPE) is the International School of Paris Pôle Alternance (PPA) which is responsible for the delivery of our Masters and Undergraduate degrees in overseas locations within the authority as granted for PPA.
Alfred Ford School of Management is academically and quality managed directly by PPA / IPE to ensure that academic standards and learning objectives are in compliance with academic quality control exercised in Paris.

Please note, although our teaching is conducted in English, the graduation certificate and academic transcript (Europass format) will be in French. 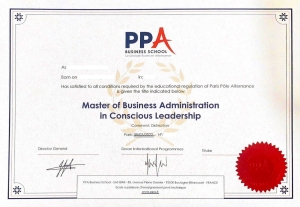